I'LD LIKE TO KNOW WHERE TO RETURN MONDAY!!!!!!!!!!!!!!!!!! (I think I may have used that line a few months back to begin a blog once)
Okay, so today wasn't one of my better days. It started out well enough...son gets up for work....son wakes mom up 1/2 hour before she needs to get up so that she can taste the smoothie he made with flaxseed (whatever that is)...mmmm. Son leaves for work only to run back in to say his car wouldn't start and he would be taking the truck. The same truck that mom was to take to be inspected today. Okay...no problem....just change inspection day. Getting ready for work was easy enough...no animals puked or pooped (take that back...the dog did of which the son chose to cover up with newspaper rather than dispose of). Anyway, mom gets into son's car and is determined to start it (dampness was the problem)....and after numerous attempts, along with the roofers next door finding interest in watching a woman try to start a car that wouldn't turn over, mom bows her head and prays to her angel to please help the car start.....and with one more turn of the key...the car magically starts! Mom thanks her angel numerous times and puts the car in gear, backing out of the driveway, only to feel a funny thump...thump....and as luck would have had it...one flat tire!!! (angel giggles!) Should I continue.....it only gets worse....son loses truck keys.....mom can't find son's car keys to give to tire man.....new tire needed because mom drove 3 feet on rim (roofers laughed)....blah...blah...blah!
But...there is a light at the end of this tunnel....we got our scooter all set and ready to take out for practice (still waiting for title) but at least it could be taken in the parking lot nearby. And the cost to put it together the correct way was minimal. So I've taken the liberty of ending my blog with some cool pics of my son on the new scooter (aka: Jalepeno the Scooter). 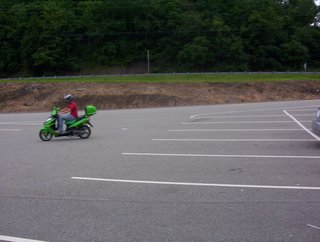 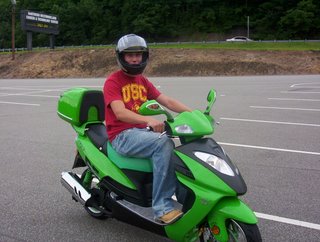 Oh, yes, I did take a spin on it in the parking lot with my son's encouragement. (he refused to take pictures...girls watching nearby) He had alot more confidence in my scooter ability than I did....but I did manage to make a turn and go at least 25 mph a couple of times. Luckily it started to rain and we had to stop or he would have had me doing wheelies on this thing.
So, till tomorrow and hopefully a much better day.....which it will be I'm sure.....don't let the blog hit ya in the butt...tootles!

I'm sorry to hear you had a bad day. Tomorrow will be much brighter and better for you. Have a good nite.

Ouch! I've had days like that. Hopefully most of the bad stuff is over for a while. Take care.

Lucy, pu-leeeeze get a picture of yourself on the scooter!! That's a great little machine.

Your trinket box is gorgeous.
I'm off to check out your kitchen.

Tomorrow's got to be better!

At least the scooter was fun!

Sorry you had such a bad day... But the scooter thing looks neat... Hope to see your pictures... Love ya praying for a better day for you... HUGS

poo on the events of monday, but... that scooter looks like great fun! oh, too bad on the photos - you'd think he'd want those for bribery material...

Yes Yes I want to see you on that scooter too! That looks like fun fun!! Frankly (on them day things) there are times I would like to give back Monday through Thursday up till 8pm and keep Thursday night (tv watching) Friday, Saturday and Sundae...