(hanging my head in shame)

Okay, okay...so I did have a nice time with my son Monday night! Yes, I admit it. I can even go so far as to say that I wish we had gone earlier in the day, had it not been for work and school, so that we could have had more time. We got there in an hour instead of the hour and a half I thought it would take. This could be because I was knitting and talking to my son and did not pay attention to his speed. I didn't get too far on the sock so I'll post that pic when I make a little more progress.
Anyway, an hour was good. We ate some pizza rather quickly as we had limited time and then started shopping. I was rather impressed with his shopping techniques....he starts at the beginning of the outlets, going to the stores he already knows he wants to hit. He goes through them rather quickly, picking out in his mind what he liked best in that particular store and does he know his prices....geez! He goes for the bargains of course and will pass up what he thinks is too expensive or not exactly what he wants. When he is completely finished, he goes back and tries on stuff and buys...he knows what he liked and where it was. I was truly impressed. I mean, seriously, being as I'm not a clothes shopper, he was a guy on mission and completed it in record time....it was great. I was mostly there for the trying on and opinions. Other times I went to the book stores though there were enough non-clothes stores that I could have definately went had we had the time. I got these couple of things.... 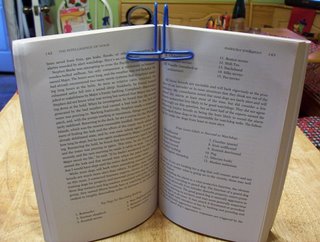 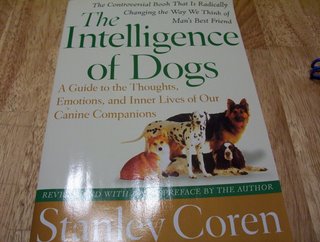 The book was only $4.00 and looked sorta interesting and I really liked the holder that lets you read and do whatever at the same time. I also got some Yankee Votive Candles which I like to melt and my son likes also. That was about it for me. He bought himself some tops and such but that was about it. He said he was pretty happy about what he got.
I asked him who of his friends didn't want to go shopping with him that made him choose me. He said he never asked anyone else...only me. That was nice to hear!
The ride home was a little longer as I couldn't knit and we didn't talk too much just sorta listened to his music....mmmm, which was not really my kind but I don't complain. He's a pretty good driver so I don't do "back seat" driving like I tend to do with the Sweetie Man.
Any way, it was a nice time. I tend to complain before I give something a chance and then 9 times out of 10 enjoyed the experience. I sorta have to be pushed out of my "comfort zone" sometime cause I like it too much. I'm definately a HOME BODY!!!

Tuesday we took the pups to the vet. Little Chloe had a case of poopy runs but the vet said it was most likely something she ate....probably those hot peppers she got into in the garden....time to get that redded up completely too I guess. Other than that, they did super well...no worms, no mites, no bugs. Got their first set of shots too. Everyone at the vets just loved them and I got a bunch of freebie stuff too cause that was their first visit. How cute is that! We're also planning on signing them up for puppy kindergarden starting in October...that should be fun! They graduate with little caps and everything! Can't wait!
Oh, well, that's it for now.....till tomorrow......tootle-lu!