HAPPY SPRING!!! Okay, so we're getting a couple of inches of snow tomorrow, but I did hear the birds chirping loud and clear this morning....so I can see the light at the end of the tunnel...and it's beautiful!!!
With that thought in mind, I want to share a special pattern with you. It's one that I wanted to share at the right moment...and what better moment than now. Introducing the adorable "Milk Jug Bunnies: 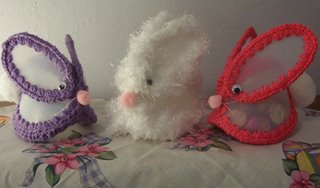 Aren't they cute!! I've made many of these in the past. I got the pattern from an old Workbasket Magazine (remember those) but recently found it again on a site called
Gramma's Easter Site. She calls them "squeeze bunnies". They are made from milk jugs and yarn scraps. The more you make the more you'll want to make if only to see the different colors. And with all the new yarns, the possibilities are endless. I would suggest that you make at least one with worsted weight yarn before attempting any other kind of yarn so you can see where the stitches are. The middle white bunny is made from a soft fun fur. I only did two stitches when using fun fur in each hole versus the three called for when using worsted weight yarn. Crocheting in the plastic does give your wrist a workout, but it's worth it when you see how cute they are. Then you fill them with all sorts of Easter goodies and the kids love 'em. (adults too) Let me know how you like them and get those pics on your blogs.
So start saving those milk jugs. And remember to get your daily dose of humor at
THE FUNNY PEPPERS. One more thing, I think I mentioned this before, but it's worth mentioning again. If you are viewing THE FUNNY PEPPERS in Internet Explorer you will only get half the experience. For some reason, over half the stuff on his site doesn't show up and it literally looks like nothing. I am a fan of IE (internet explorer) but Mozilla Foxfire is nice to have as a backup. Download it...takes two seconds and just have a shortcut on your desktop for when IE is giving you trouble. Who knows, you might like it better than IE. THE FUNNY PEPPERS is really nice on Mozilla Foxfire with lots of links and games....definately worth a "look-see" (and not just because he's my sweetie-man either...he did a nice job on the site) Netscape also works well....well with that bit of info... Till tomorrow!