In case you thought I was loafing...

I wasn't! I was making this! 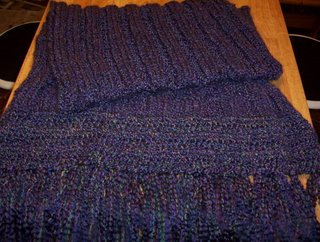 It's a prayer shawl for a very kind lady in Maryland who is battling breast cancer right now. She's seems to be doing well so hopefully the prayer shawl will help her through the rest. But I have to tell you, beside this not being the best of pictures of it, I had a real time with this. Everything was going along fine, when I started the last and final skein. It turned out to be a different dye lot or else I accidently picked up a color that was extremely close to it. I was sick! I had knitted about 15 rows before I really discovered it. Now I am new to knitting and don't know how to frog knitting if that is even possible...but I did. I ended off the second skein then took the third and final skein and did about twenty rows of crochet on each end of the shawl. It had a strange shape when all was done but if you saw it on, it really wasn't that bad. The lady who got it loved it from what Sweetie Man told me...so I guess it will serve it's purpose. My prayers are with her through the shawl.
I did have Election Day off of work so I did the usual running around after voting which took a total of 1 hour and that included the annual "boob squeeze" at the hospital. It's not the squeezing (though I do thank the mamogram angels that the power didn't go off at that particular moment leaving me with a permanent pancake on my chest)...but I do hate the fact that those squeeze machines are so darn cold...brrrrr! Okay...that's off my chest...get it? Off my chest? (nevermind)
Anyway, I also cleaned or put a large dent in one of my closets that is actually a walk-in sorta thing that was becoming an "open the door and throw stuff in fast" if you know what I mean. It's now accessible and 6 garbage bags + and 3 clothing bags later...it's pretty nice if I do say so myself. I'm off again for Veteran's Day on Friday so I probably finish that up. I feel such a sense of accomplishment after a good "redding up"!
Well, that's about it for now. If you have a moment, check out my first Dogster Badge on my sidebar. If you click directly on his name, it will take you to Eros' website that we started. Don't forget to leave him a bone so he'll know you were there. We'll eventually have one for each dog and then one for the cat at Catster. Thank you to the wonderful person who emailed it to me...you know who you are!
So, till tomorrow and, in my case, a "mock" Friday.....Hasta Manana, yinz guys!