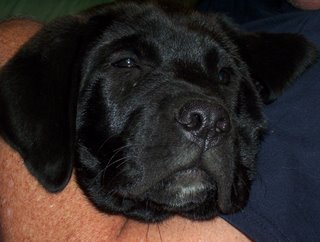 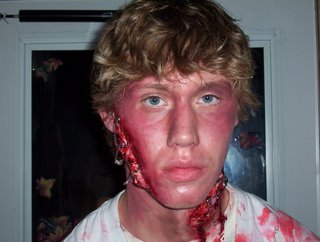 Okay, the first one is Eros that cute puppy who actually still is a puppy but getting bigger everyday. He is a cutie and a good one at that!
The second is not so cute (not with this makeup on anyway)...but I still love him. It's my son in his Halloween costume.....okay,I'm not going to brag (yes I am) but I think I did a pretty good job as makeup artist. So good in fact, that some girls actually thought it was real (sorta makes you question the intelligence of today's college students when they think gashes in one's body are held together with safety pins...hopefully they weren't pre-med!) He's a cutie too underneath it all! My son started working at Starbucks last week (oh, yeah, coffee for MOM!). First he had no job and then he was offered two. (remember the Panera Bread one) He chose Starbucks (good boy)....seems to be a great company that really cares about their employees....and he looks good in green!

Oh, and my doc appoint went good except for a case of acne rosecea (adult acne sometimes occuring in pre-menopausal woman....I guess that would be me!) At first the doc thought it was contact dermatitis but since it didn't clear up he now thinks it's the acne thing. He gave me antibiotics and a topical gel that is drying the heck out of me....(don't expect any close up pics in the near future). Wish me luck!
And last but not least, this pic is my first try with knitting on circular needles....I think I posted the partial hat on straight needles but I didn't like it so I frogged it and attempted circular. It was supposed to be in my son's college colors but it was a little big for him so Sweetie Man said he would wear it. I did start another for my son in brown and smaller. 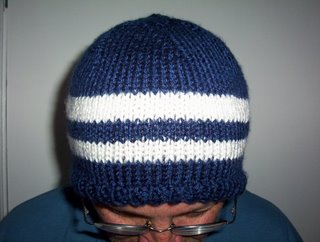 Well, that's about all for tonight. Have to do a little homework with the "kids" as tomorrow is puppy kindergarden. I think we aren't going to get as far as the other puppies as it is very difficult to do homework with two dogs and one older one watching the other two get treats. If we put them in separate rooms, they hear the "click" of the clicker and practically try to break the door down....being a MOM is tough! Anyway, till tomorrow, and another Manic Monday....tootles!