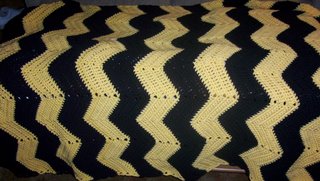 Yep, that's right folks, one of the first WIP that I posted on this blog is finally finished. If you have been reading my blog since January, you would have seen this thing almost done. I started it so that it would be done in time for the Steelers trip to the Super Bowl. BUT...little did I know that everything in Pittsburgh that was yellow or black was sold out. So when I ran out of yellow yarn, lo and behold I could not get it. AND, when I tried to order it online, I got it about two months later due to some snafu in the order. But now it is done....okay, in time for sweetie man for Father's Day, how's that sound? I just sorta draped it over a table to give you an idea on the colors. It really is just your basic ripple...but it was my first ripple and was so easy that I started thinking about all the color combo's this would look good in. Being as I'm in a red, white, and blue mood (happy Flag Day, by the way!), I think that would make an awesome ripple afghan. This was really nice to work on now too on the porch since the evenings are still a bit cool and it covered my legs while I worked on it.
So that's it for now.....I'm sorta wiped out since I worked in the yard and cleaned out my cellar a bit (okay...that's "basement" for you non-Pittsburghers). So, I'm gonna head up to bed and probably just read some. So till tomorrow......nite all!