Things I'd rather not do!

There are few things in life that I will honestly take getting my tooth pulled instead of. One of them is what I refer to as "intentional clothes shopping". This is the type of shopping where you go out the door with the intention of going clothes shopping...I just don't do it unless forced into it by guilt. My idea of clothes shopping is one of two things. Either my sister drops by with an outfit she no longer is wearing and says, "Would you like this outfit?" and I say "Sure!" (most times without even seeing it or trying it on)......SOLD! Or...the Sweetie Man and I are in Walmart grocery shopping and we are passing by the clothes section on the way to the checkouts and he says, "Hey, that would look nice on you, and it's on sale!" SOLD!
Unfortunately, my son did not inherit those particular genes of mine....he loves to clothes shop...and I'm not talking Walmart. Tho he has been known to find some tremendous buys at Goodwill of which he was most proud of. (he's learnin") He tends to sell off what he doesn't wear anymore to a place called Plato's Attic for money to buy more clothes and what they don't take he will pack up for the Veterans who will graciously pick up clothing from our house. Which then leads him to say..."I have nothing in my closet to wear!" It's a vicious circle!
Anyway, my point being is that he wants me to go Outlet shopping with him tonight. UGH!!!!!!!!!!!!!!!!!!!!!!! PLEASE....NOT THAT!!!!!! DIDN'T I DO ENOUGH WHEN I CHANGED YOUR STINKY DIAPERS???? ANYTHING ELSE BUT THAT!!! I tried all of the normal excuses...."I'm broke" (he has money he said)....."Who will take care of the pets?" (okay, that was lame since we will only be gone a few hours!)......"Wife Swap is on tonight." (didn't work...I could tape it!)......"I can't listen to your music!" (he claimed I could listen to what I wanted on the way up). Then he resorted to IT (GUILT)......"Mom, this would give us Mother/Son bonding time!" Now, I'm not stupid....it's just that none of his friends could go with him and he didn't want to go alone since it's an hour and a half drive to the outlets. Don't get me wrong...I'm all for Mother/Son bonding time....but not with clothes shopping.....yucky!!!! Then he throws in, "I need your opinion!" That deserved a good chuckle since my idea of "looks good" is "if it fits...it looks good." And on top of that he said, "There are book stores there" Damn...got me!! He won! I'm going outlet shopping after work! Then I started to think about how I could possibly make this trip better. Okay, what would I be doing at home if I wasn't going, besides enjoying myself...I would be crocheting or knitting. So I immediately started some small project to take with me on the long and grueling trip to the outlets and this is what I came up with. 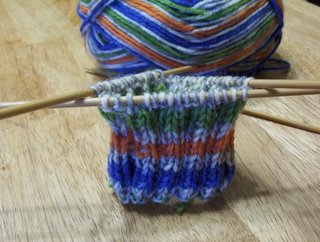 I've been wanting to start another pair of socks with this self striping yarn....it's Knit Picks Merino Wool in the color Petal. It must be have been a clearance item I got awhile back as I can't seem to find it on the website anymore, so I hope I bought enough to complete two socks. I started it while watching TV in bed last night. Turning out pretty nice. No real particular pattern...just simple ribbing. I love the pamphlet "Learn to Knit Socks". It's how I taught myself. Lots of different easy socks with great explanations. I got this pamphlet book at JoAnn Fabrics.
So, that's it for today.....I'll have to post my progress on the sock tomorrow tho unfortunately I'll only be able to knit on the way up as it will most likely be dark on the way back......keep your fingers crossed tho....maybe one of it's friends will want to go instead and him and I could bond elsewhere....like at JoAnn Fabrics or something..... Till tomorrow!!!