Well, my computer connection to the internet is getting better. Unfortunately the weather is not. It's cold, it's damp.....and it's MAY??? Oh, well, leaves me more time to sit inside and post a couple of prom pictures that I promised you last week.
This is my son and his lovely lovely date (not to be confused with the gal pal.....which is literally what the name inplies....Pal who happens to be a Gal) So I guess you can say that his date for the prom is also his "gal pal" but not the "gal pal" I usually speak of. Anyway this is them before the prom... 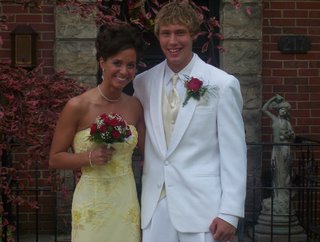 Aren't they just the cutest? But what prom couple isn't? They are all so darn cute!!!!
Okay...next pic is Mom (me) and the Aunt (my sister) posing with "the man" (my son). Not as cute as the first pic...but I thought I would throw it in as a bonus! (it's not one of my better pics as I was unprepared and had just come from cutting the grass)..... 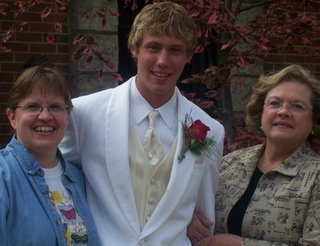 Now my son's date is a senior in high school and as you know my son just finished his first year in college. So that was sorta cool that he got to go and visit with some of the kids he knew when he was a senior. They did it a little different. Used to be the prom was an all nighter but this time the kids were bussed to Pittsburgh's Hard Rock Cafe till midnight. They were bussed back and most just went out to breakfast and headed home. Seems like everyone had a safe and fun night!
Well, that's it for tonight. I'm off work tomorrow for election day, so after I vote, I think I'll just chill, crochet, knit, and rearrange some stuff in the Kitchen which is coming along really really nice. Can't show you any pics though until sweetie man sees it in a little less than two weeks...cause he reads my blog and I told him it was a BIG surprise.
So, till tomorrow...tootles!