Can you smell them? 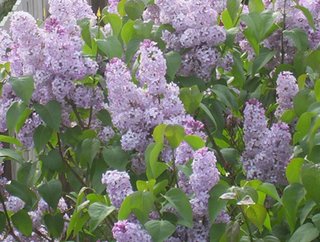 I love lilacs. Can you smell them? These are some of the flowers on a bush in my back yard. When I was a little girl we had two lilac bushes in this yard. When I moved back in this house that I grew up in, the lilac bushes were gone, but I managed to find a few sprigs sticking up near an area where one of the bushes were further down in the yard. Just for the heck of it, I dug up this sprig, which was not more than a stick, and replanted it were one of the bushes had been years ago. It bloomed and grew into this beautiful bush...like it was meant to be there.....I guess like I was meant to be here. I love this old house....I fought to get back in it after my divorce and I did. It was gutted and remodeled when my ex and I moved in here 15 years ago. Now it's getting a mini makeover that my sweetie man and I are doing....making it bright and beautiful the way it was when I was a little girl. We have more painting to do and it needs recarpeted....but we'll do it. I've started repainting the kitchen today....and I'm so excited about it. It's something I'm doing as a surprise for my sweetie whenever he returns. The kitchen is really his spot since he loves to cook....so it's all going to be done in a pepper motif. I took some before pics and I'll take "after" pics and definately put them on my blog. So keep an eye out.....cause it's gonna be something to see...I can't wait to finish it up.
Well, that's it for tonight.....trying to figure out knitting socks and crocheting a new purse all inbetween the painting. The busier I keep, the faster the time will go while my sweetie man is away. Of course, my son did tell me not to be sad cause he'll be around alot...which I thought was nice. He neglected to tell me that all his friends would be around too though....that's okay.....I love the noise! Till tomorrow.....later gator! Oh, before I forget...thanks for all your "zit" stories and advice.....mine is doing much better...the spiders haven't hatched yet but they don't hurt as much either!!!