Okay...everyone gets to post pics of their kids and grandkids but me. My son would make me take a dozen pictures in three different types of light in every room to see which one he liked best for me to post. Ah....let me think....no!!
Instead I'll give you more pics of the puppies....I promise I won't bore you too many times with this, but at this point in my life, with three "kids" (Katie the teenager, Chloe the middle child, and Eros the baby) my life is pretty tied up in getting these little ones adjusting to each other.
They are just like kids tho...it is so weird! The one good thing is that they grow up faster...don't talk back.....and I don't have to spend a zillion dollars on college. So, being as nothing much has happened today in my life, here is a pic of the baby after he decided that digging in dirt was fun.... 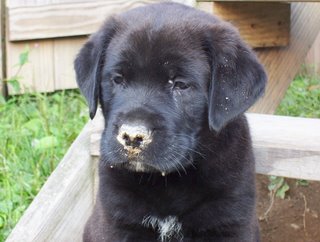 And the two youngest here are getting along very nicely so far. They still need to be watched but I can do it with them in the same room now. My son even has been pitching in without me asking, believe it or not, to help with them. Here's the two chewing on some rawhides after having run themselves exhausted around the house. 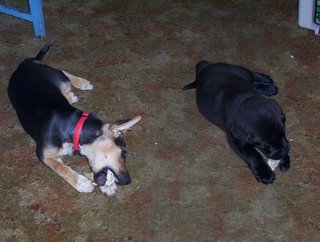 These two I'm concerned may be falling in heavy "like" with each other. I told the Sweetie Man, if I walk into the kitchen one day and see a scene from Lady and the Tramp with a string of spaghetti between them.....I'm calling the vet for some emergency neutering!
Well, that's it for tonight...gotta put the kids to bed. Hey, stay tuned tomorrow, for the exciting adventures of "LG meets BG"! Some of you already know what that means...but there should be pics tomorrow! Nite, yinz guys!!!