Well, tonight we went out to dinner with my son and his gal pal. My son had told us about this place that he thought my sweetie and I would like cause he knows how much we like cabin type places. Well, this place was cabin like but in a totally different way. It was really cool. This first picture shows the view from our booth. 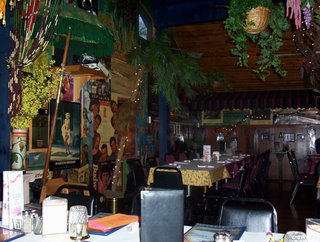 There is stuff everywhere. It's like you don't have enough time to look at it all. Posters, beaded curtains, twinkle lights, you name it.
They also had this cool looking lamp...nothing I'd have in my house, but it was so unusual that we just had to take a pic. 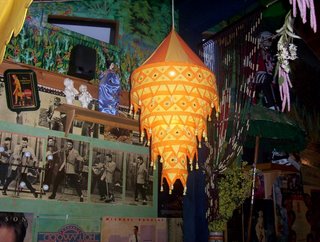 This odd bride was hanging from the ceiling when you walked in....it really was the first thing you saw because she was so big. I'm sure there is a story behind it as, from what I understand, there is for most of the items in this family owned restaurant. 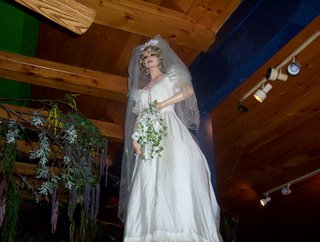 This cute piano player, who probably was at least 80 years old, sat there in his suit and tie playing the piano...we heard someone playing a coronet also, but I didn't see him/her. 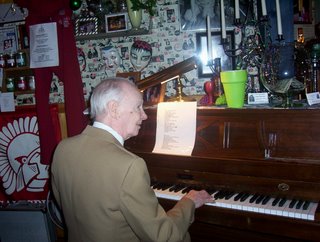 Now you know of course, I had to throw in pictures of my son and his gal pal as well as my sweetie and me. 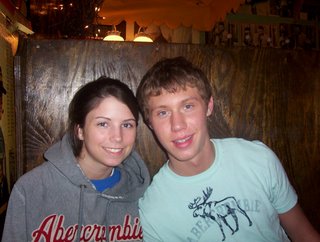 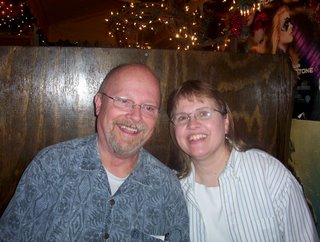 We had a very nice dinner and good conversation. It seems as though ever since my son got out of High School and into college, we have so much more fun with him. He actually asks us to go places with them. Like last week when we went to the movies; in his younger days, he wouldn't have sat next to us...like it was really uncool. Now he does...he actually wants to. It's like when those teenage years come, you have to watch them from a distance and try to guide them without them knowing but at the same time be right behind them ready to be there if, as Dr. Phil says, they need a soft place to fall. It's one of the hardest parts that I've experienced in my son growing up. They want you, but they don't want you...they hate you but they love you. It's really crazy. But I'm see him growing up and maturing somewhat and becoming his own person, ready to face the world. I sorta think that God just loans us our children.....we'll help them grow and guide them then send them on their way to start their own lives. Having an only child, I don't want him tied to my apron strings....I want him to have his own life, his own family, his own world as my mom did with us. We've given him the tools, showed him how to use them...now we want him to build a life. And most of all....we want him to be happy!!! We want him to follow his heart and his soul in finding what and who makes him happy and go with it....just be happy.
Ok, child rearing 101 is over...off to the rest of the evening. Enjoy yours...and till tomorrow....tootle-lu!