First off...Merry Christmas to everyone in Blog-land!!! I have been crazy busy crafting and still am and finally am able to post some pics of what I've been making....now that some people of got some of them! (and the family whose hasn't knows who they are) Thought I'd start off with a pic of our Christmas tree. Alot of homemade ornies but not too good of a pic...just trust me, it's beautiful! 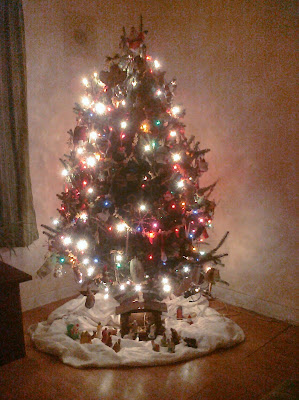 We had (are having) a great Christmas Holiday! I was actually still finishing up some gifts a couple hours before they were to be opened Christmas morning....I think I do some of my best work then. A couple of gifts were going to my stepdaughter and hubby in Germany. I made a glass block light present and a rag wreath with a matching small tree (tree not pictured) as well as some small stockings and a pillow (also not pictured) They luckily received them before Christmas which was a miracle and they loved everything...they wanted Christmas decorations for their new house. 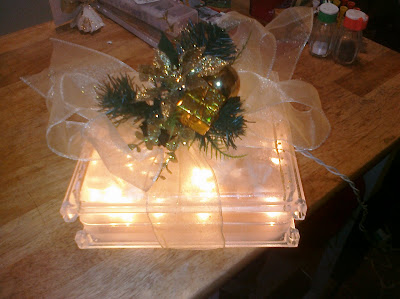 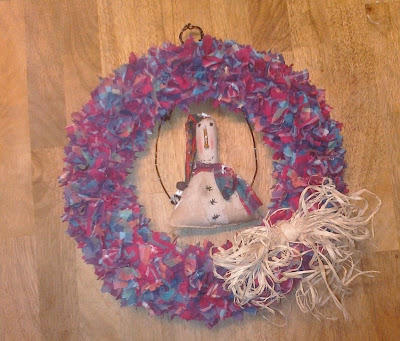 This was the ornie that I swapped with over at the HOE exchange. It was the Lizzy Kate Snowman for this year. I stitched it on 32 count and made it into an ornament. My partner really liked it and actually said she was just about to stitch this piece. 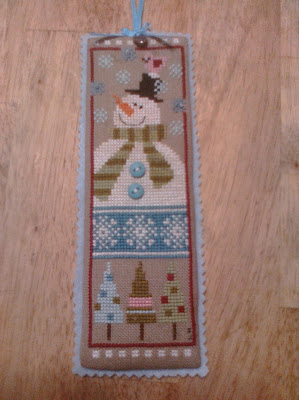 My son and daughter-in-law got their share of homemade also. My son plays alot of World of Warcraft and he's always saying he has a "raid" he has to do (he's a Raid Leader in W.O.W.). So I made this simple painted t-shirt to match some pj bottoms I bought him. He really liked it.
Front.... 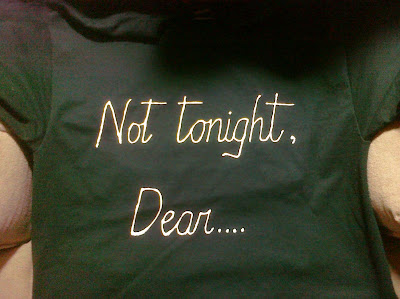 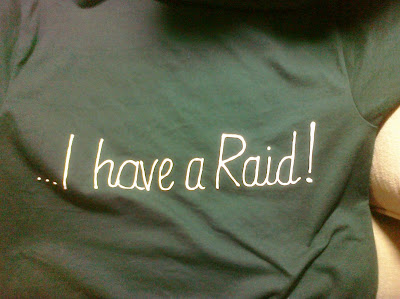 Also crocheted this LOOOOOONG scarf for him and put the Alliance emblem from W.O.W. on it. (he liked this also but was intent on watching something on tv while I was taking the pic)

Bent Creek had this wonderful cross stitch wedding sampler that I couldn't resist. They both received that as a present for their apartment as they said they need things on their walls. I even framed it myself! 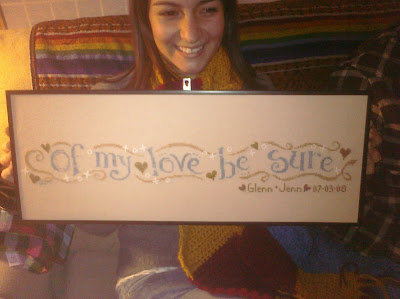 Check out this Harry Potter scarf I made my DIL. She loves Harry Potter and I found this on the Lion Brand site...there is a crochet one and a knit one. I made this much longer than it called for though so she could wrap it around....another gift well-enjoyed. 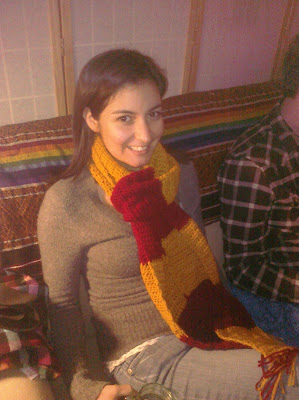 I cross stitched this Lizzie Kate for Hubby's office space. I love this saying....and I think I'm loving Lizzie Kate more and more. I just did a simple finish....sorta like a "pin and tap" without the frame. 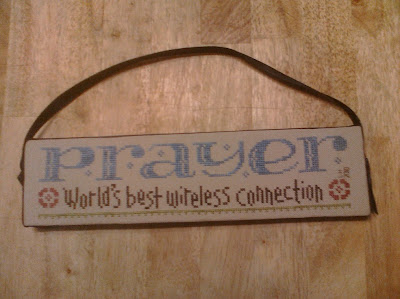 And once again I was recruited into making 15 of my shelf ladies. I found a new technique on the Martha Stewart site that I applied to these and it worked out great. They are made from simple roof flashing that you can get at any hardward store. They are fun to make! 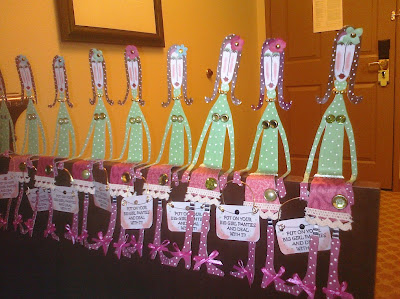 I made about four of these mustache/beard hats this year. My son saw them for sale online and asked me if I could make it. The patterns were no where to be found so I just studied the picture alot and came up with something very similar. They work up pretty quick. He wore it to the movies once and a stranger asked him where he got it. My son suggested I sell them in my Etsy store....I'm thinkin' about it...IF I can find the time! 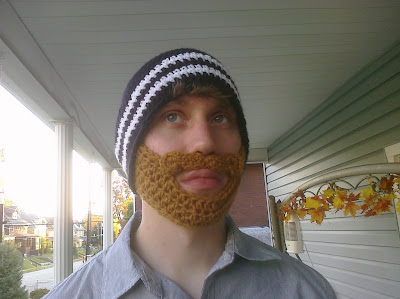 So that's about it.....I turned 54 a few weeks ago and just love this picture I took of myself the morning of my birthday in the bathroom mirror when I woke up. It always makes me smile and reminds me that age is ONLY a number! 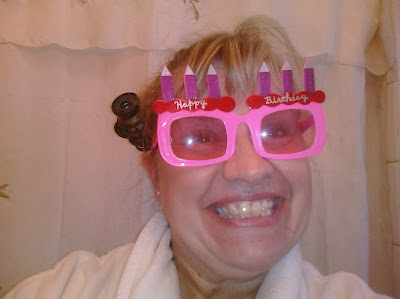 So, with that....I'm thinkin about making one of my resolutions to post more often.....so keep tabs on me with that one, ok?
Till next "year"....yinz crazy guys!!!

What lovely gifts you have made for Christmas. The bearded hat was wonderful!
Belated Happy Birthday wishes. I love the mirror photo! What a great way to celebrate the day.

Lovely post. You made soem great gifts and finished them off perfectly! x

Wow! You made so many adorable gifts. Love the LK exchange piece.. I think that's one of the best LK designs ever.

The moustache beard, the shelf ladies and the goofy t-shirt are my favorites.

Love all your handmades!! especially the glass block and flashing ladies.

Love all the crafty things! You are so kooky and sweet! Love and huggles.