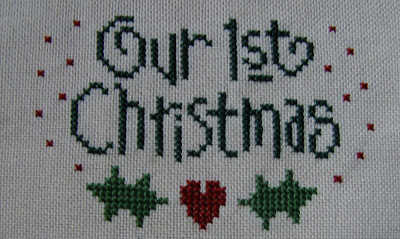 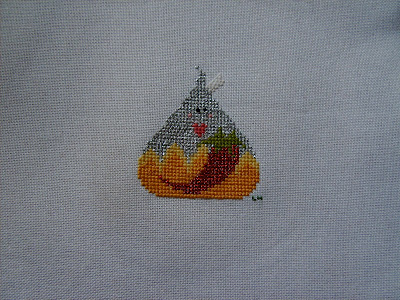 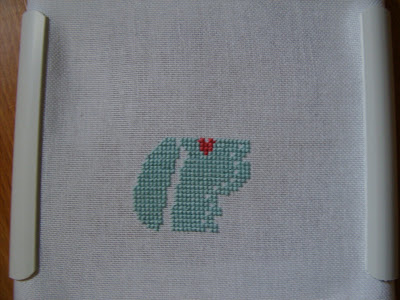 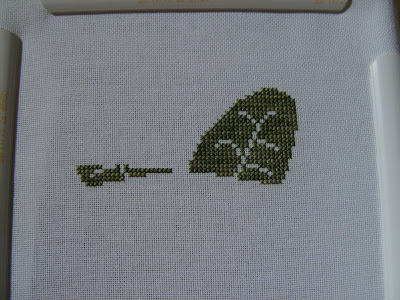 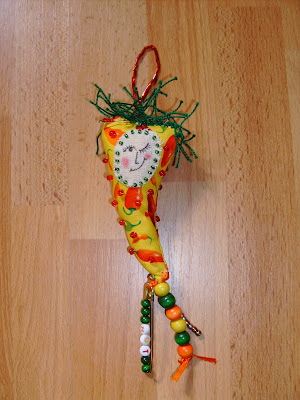 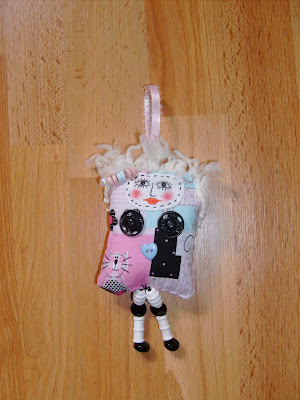 I haven't been a very good blogger lately but I've been busy being creative. I can't always post things as most of the things I make are for someone and I have to wait till they get it.
So, on that note, I'm posting some things I've made for my adorable great nephew, Owen. I had a pattern for the sock monkey but I also had a book that had the sock tiger in it. (also had a sock elephant but he was a little creepy looking...possibly when Owen gets a little older and enjoys creepy things) 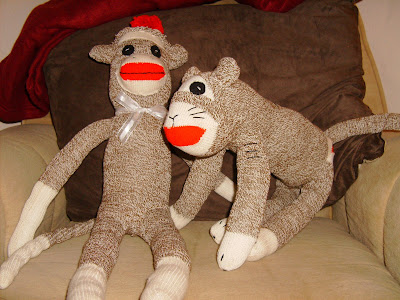 Then I crochet this really cute hat for him from this year's Crochet-a-Day calendar. Super easy! 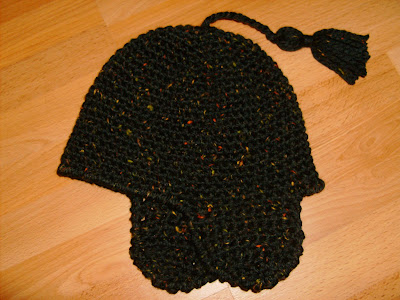 And I couldn't forget his mom and dad....I love crocheting these slippers. Pattern is HERE. I've made a bunch of these...notice the men's Steeler colored ones!!! 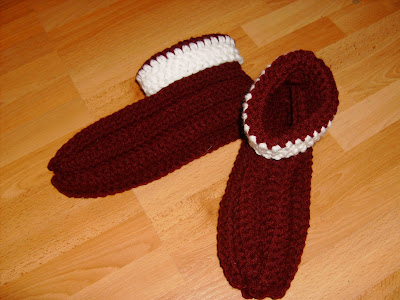 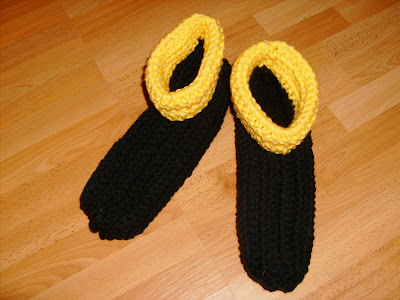 And last...but not least...my newest obsession....DOTEE DOLLS. Whipped this one up during the Bachelor last night. So incredibly easy and fun!! I've already started a second. Have no clue what I will do with them, but I do enjoy making dolls along with all the other things I do so maybe I'll just keep them for myself or start a collection or something. They are only about 4-5 inches long depending on how you make it. Just Google Dotee Dolls and you'll come up with a bunch of stuff. If I understand correctly, they were created by Dot Christian and became big on swap-bot last year....so I'm a bit late on things. But I love them!! 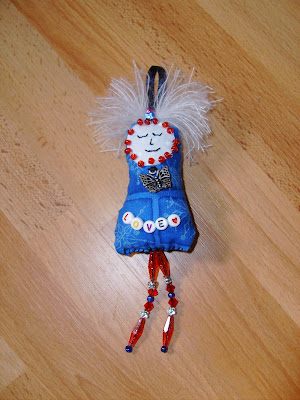 What Does Your Candy Heart Say? 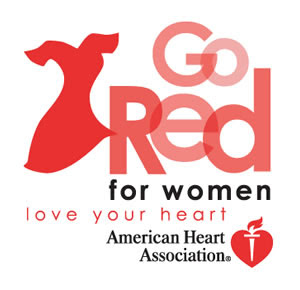 I'm one of those women who needs to take good care of my heart...high blood pressure, high cholesterol and strokes run on my dad's side of the family. My brother and dad both passed away from heart related problems and unfortunately my genes run in that direction. So I follow my doctor's orders with medicines and healthy eating (most of the time) tho I'm a little lax on the exercise part and weight control. But days like this, and wearing my red, serve as a reminder to me that all of it is important to live a long and healthy life......so I can annoy the heck out of my son when I'm old and gray...tee hee!!!
Till next time....GO RED yinz crazy guys....

....THAT I WAS GONNA GIVE YOU PICS OF ANYTHING ELSE BUT SUPER BOWL PARTIES??? WHEN YOU'RE IN STEELER COUNTRY.....YOU WILL KNOW IT!!!

So let's get this party started with pics from the work Tailgate Party....

First off are some of my fellow crazy workers....(my boss is the one with his mouth open!!)

We told him not to wear Super Bowl stuff cause when he does, we lose! 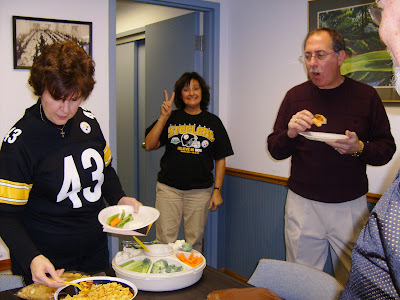 Second is the Sweetie Man and I. He picked up the pizza so we let him stay and eat! 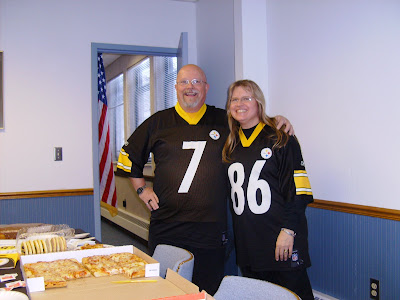 This was our little spread which we picked on all afternoon...while working (uh-um!) 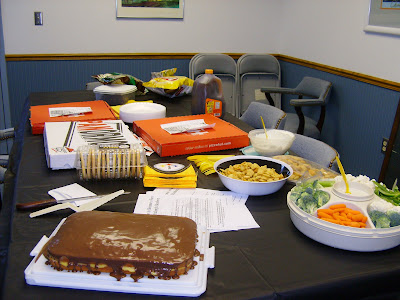 And no party in the 'burgh is complete without Smilie Cookies from the Eat-n-Park Restarant!
They are actually closing their restaurants early Sunday for the employees to watch the game! 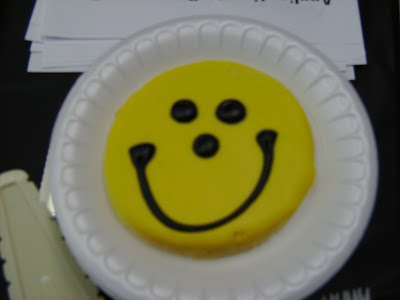 The second Tailgate Party was at church...your read correctly! The Pastor's sermon was on "Why I Love The Super Bowl". Only our Pastor (a hugh Steeler fan!) can draw connections between The Super Bowl and God! And believe it or not, it was great!!!
Our church is currently house in a beautiful building in the City orginally built way back as a hotel of sorts for out of town employees of the Alcoa Company to stay. It's an awesome building.
Anyway, we were invited to come down and help decorate and bring some stuff so of course we brought Ben as the current player for the Steelers and Jerome as the past player. (live size of course) 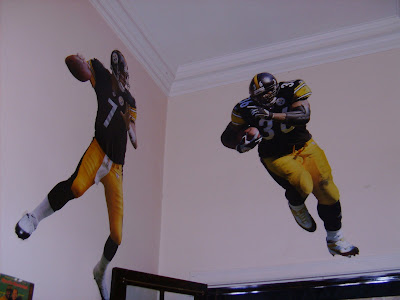 This is our Pastor in preaching mode....check out all the outfits! 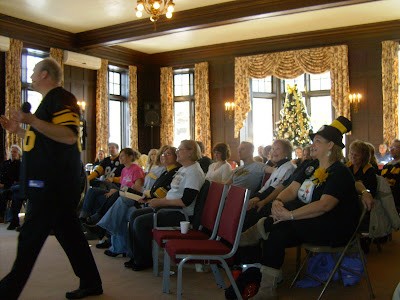 This was our band accompanied by the Kids Quest group singing a Steeler Fight song at the start of the service. 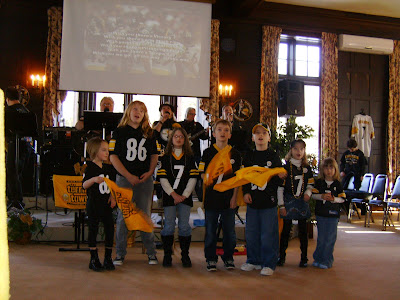 Oh, and that's Sweetie Man who sat at the entrance way scaring everyone...or so he thought! 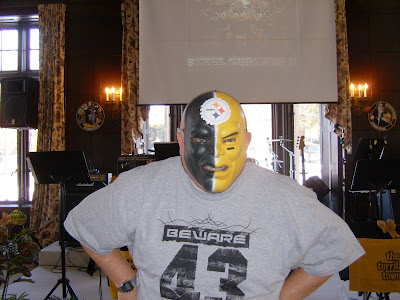 The Audio/Video booth where I sit (working the Power Point slides) was decorated with Terrible Towels! 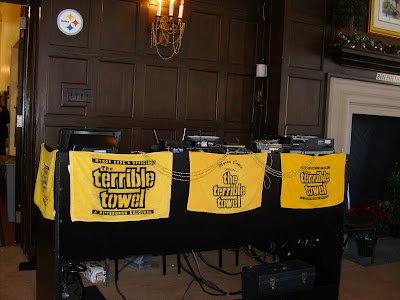 This was the stage in church before the service started. 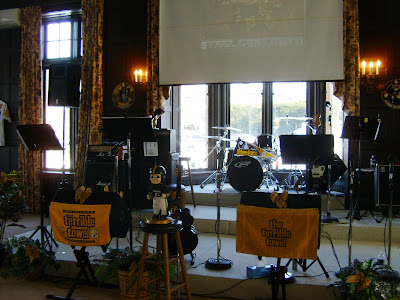 Two Steeler Trees were on either side of the Sanctuary...they were beautiful. 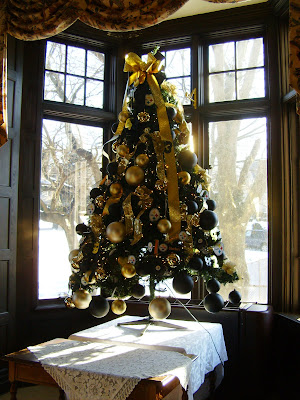 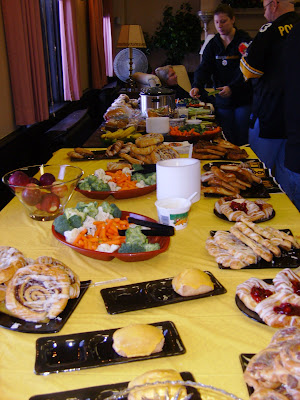