A little garden for two...

Well, today was the first semi-warm day...lower 60's and a perfect day to get this garden started. So while I cleaned up a little in the house, Ed started his garden. Last year was the first year he had a garden at this house and it was a little thing that ended up having alot of weeds. We did get some tomatoes and peppers from it...but it was started rather late in the Spring so we got what we sowed. This year is gonna be different... 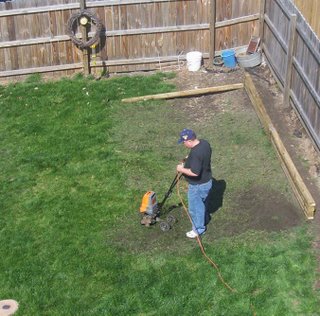 As you can see Ed was building a garden with landscaping timbers and beyond the fence (what you can't see) is 1/2 ton top soil. 1000 pounds of soil that had to go from the truck bed to the garden....and two middle aged people to do it! Oh, yeah, me and sweetie man unloaded 1/2 ton of top soil into this garden... "5 gallon bucket brigade" style!!! Took us a couple of hours and a few tea breaks in between but we done did it! Unfortunately it just barely filled the bottom. We'll probably just get a billion bags of top soil next time and finish filling it up. This is the almost finished garden minus another ton or so of dirt. 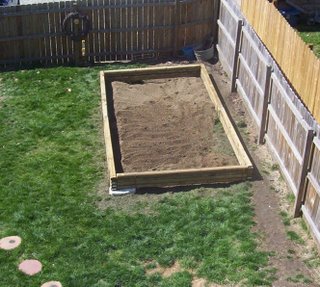 Good thing we will only have to do this once...next year we'll just need to fertilize or whatever you do to gardens to make things grow in them year after year. Seeing as we are both a little bit sore now...we figure that with a good nights sleep.......these middle aged bodies will most likely not be able to move tomorrow morning!
Okay, just so you don't think I forgot about my yarn, I must show you something I did yesterday. As I am a life long crocheter but a newby at knitting, I watch Knitty Gritty on DIY and I learned this little trick (which you life long knitters probably already know). I made my own knitting needles. I measured a dowel to a needle gauge, cut, sharpened the tip in a pencil sharpener, sanded, and put little wooden acorn ends which I stained. This is the result. 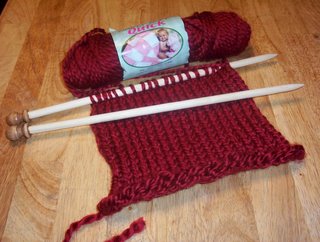 I love them. They are so light to work with. I love the feel of the wooden needle versus the metal one but the wooden ones to buy are rather pricey....so I made my own. (don't look for me to make crochet hooks tho....at least not yet) The pattern is the same as the purse I made a few days ago (see pics from a few days ago) but this time it is a bit smaller as it is for the son's gal pal. In her school, they cracked down on large purses as kids were bringing cell phones and using them to cheat on tests (don't get any funny ideas, Kaity....just kidding!)....go figure. So, now the purses can only be as big as a half sheet of paper....and yes they do measure them. She really liked my other purse but wanted a smaller one. Hey, just another excuse to buy more yarn...don't ya love it! I told her never to be afraid to tell me if she liked something and wanted it made....glad to oblige..(he-he).
Well, getting late, and my body is getting sorer by the minute so I think I need to put it in a reclining position. I have a feeling that the only thing working tomorrow will be my brain....I'll let you know....till tomorrow and another warm spring day...at least in PA!!! Tootles!