Take me out to the ballgame....

Our Saturday was spent in Pittsburgh attending a Pirate Baseball Game. It was SkyBlast night, so we are talking a sell-out crowd and the best fireworks ever...win or lose! We started out our afternoon walking across the Roberto Clemente Bridge...named after #21, one of the greatest players ever (at least in my opinion!) Those were the days when I was a huge fan! Anyway, this is an awesome shot of the city behind us. 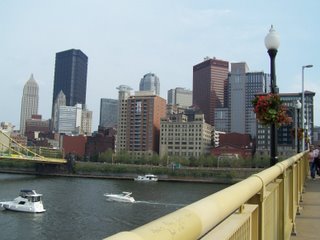 This is a shot of what we were walking towards. I have no idea who that looney tune is in the right hand side of the picture, chewing on corn nuts, cause she couldn't wait for dinner...geez! 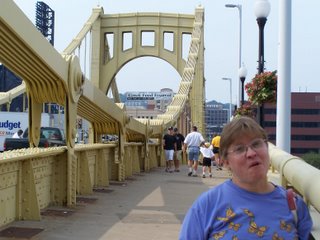 We had an early dinner at Outback Steakhouse and if you look directly below the sign in the next pic, you can see some arched windows which was directly across from our dinner booth so we got to watch a bit of batting practice while we ate before the game. That was cool! 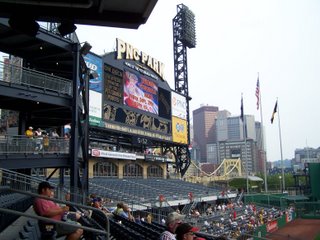 It was a sell out game but you couldn't tell from this picture since we got in a little after the gates opened. But trust me...it did sell out. Practically everyone of those seats was filled. 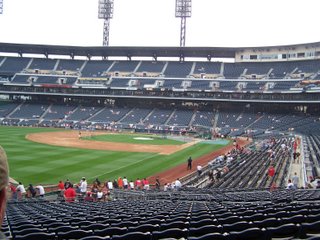 This is my favorite pic, since unbeknownst to me when I was taking it, you could see the Pittburgh skyline in Sweetie Man's sunglasses. I thought that was neat! 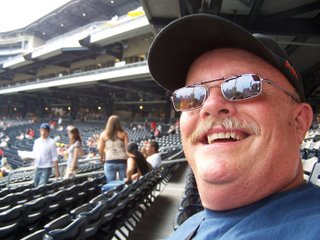 The Pirates lost to Houston but it was fun anyway. The guy behind me got hit with a foul ball in the shoulder, the guy in front of me caught a t-shirt in the t-shirt toss, and I must have done the wave 1/2 dozen times. Got home close to midnight and crashed and then just chilled on Sunday. Now it's time for Monday and hopefully a quick week since next weekend is the long Labor Day weekend...oh, yeah! So, as they say in that good old song...."it's One, Two, Three Strikes..........I'M OUT....at the Old Ballgame!!!!!!!!