And what I mean by that is that my little Terrier mix, Chloe, was spayed today. I felt so bad for her when I brought her home this evening. She is normally so incredibly active, running and jumping, but this evening she couldn't even make it up the steps. She was pretty drugged but all went well so they say. She has a two inch incision on her belly and I put her in a t-shirt to keep her from messing with it. When I brought her home she just went into her crate and laid there. Poor little thing. Eros, the mastador, was missing her today so much. She is the one who keeps him active and happy and she just wasn't around. He was sorta lost and kept wanting to go outside, probably thinking she was there. When she finally came home, he was so excited and wanted to play with her, but she of course wanted left alone...hence, I crated her. I'm sure she'll be a little more normal tomorrow. It's so funny how they become so attached to each other. My older dog, Katie, enjoyed the peace and quiet of not having Chloe jump around I think.
Anyway, with that said, I wanted to post the pics of the graduation of the two pups that we went to a few weeks back. First up is Chloe. As you can see in the second pic, she is smiling.....no more school....no more throwing up in the car on the way home...she was happy! 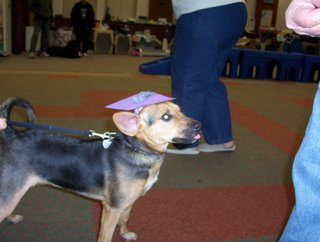 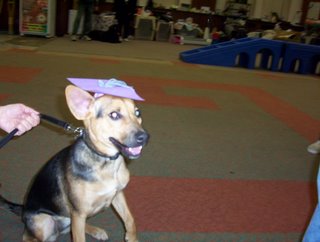 Eros was in his usual school position...laying down. The second pic is of the Sweetie Man with him playing one of the games we got to do that night. That one was carry the water and holding the leash at the same time.....Chloe and I flunked at this one! 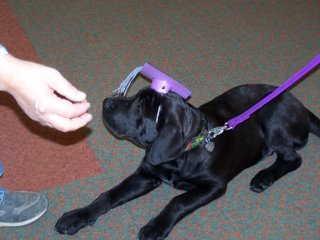 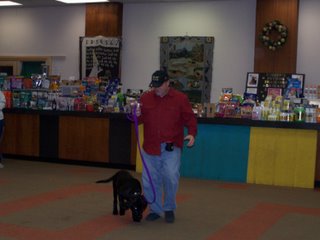 So, that's about it for tonight.....just a little doggy talk. And just so you can't say this isn't a craft blog...I'm posting a pic of the Cal Pal crochet ornaments I made....penguins....aren't they cute! I received some awesome ones from the girls over there...almost all the ornaments on my tree are homemade, so it was a perfect match for me. 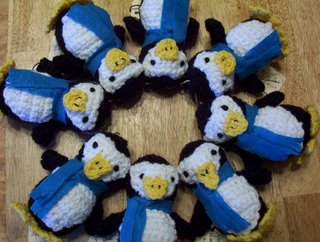 Oh, and one more thing....I switched to the Beta Blogger thing. I noticed that I couldn't leave comments on some people's blogs unless I signed up for a google account. No biggy actually, so if you can't do it on mine, sign up for one and you'll have the name and password for a comment.
Well, that's it for tonight...I'm pooped and I may be getting up in the middle of the night for a puppy who's not feeling so well (tho, I hope not) so I'm gonna hit the hay.....till tomorrow, yinz guys!