Well, it's Monday and I'm sitting here watching the Steelers on Monday Night Football and missing the premier of Wife Swap. Supposedly, it will be replayed tonight at 1 am....of course I'm taping it. It's probably better this way since I would have been switching channels constantly for two hours.
Okay, onto my weekend. It started out pretty good with my Great Bookmark Exchange package from Karla. AWESOME!!!!! 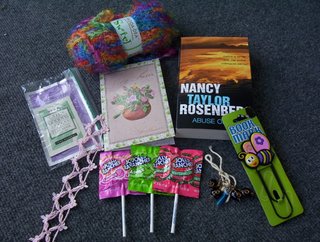 Oh, how I love getting books in the mail....and as you can see she crocheted a beautiful bookmark as well as giving me a cute bee one and a few other goodies including great stitch markers which I do use and beautiful yarn. The colors in that yarn are so so pretty too....thank you sooooooo much Karla. Okay, so I started reading the book too...just couldn't wait....sometimes I'll read two books at one time....crazy, eh?
This weekend we also spent cleaning up the garden. I do have to tell you that I fell backwards into a box of newly picked tomatoes smashing them....now this was hilarious and I laughed so hard while laying on the ground, that Ed had to take a picture. He wanted me to post it, but when I looked at the picture larger than life on my computer screen, I opted not to upload it since it showed a little more of me than I want the zillions of bloggers who read my blog to see....at least until we know each other a bit better. (sorry, Ed!)
In other words, my shorts were hiked up a little further than he noticed while I was on the ground with my "tomato butt!" But I did manage to take an awesome pic of the Sweetie Man with his newly picked tomatoes in hand....or rather, in bucket. 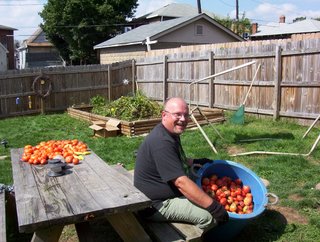 He also managed to catch this beautiful monarch butterfly for me to take a picture of. 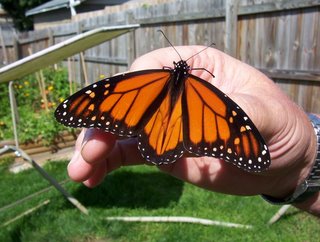 He released it unharmed so not to worry.
And, of course, you know I had to take a pic of the kids since they are growing like weeds. 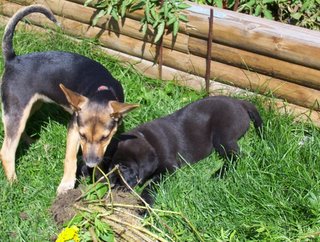 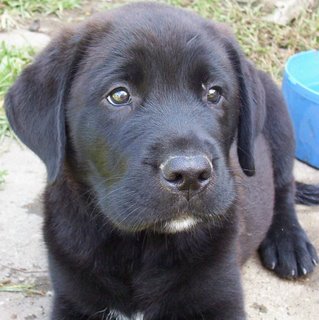 Crazy Chloe!
Check out those ears. 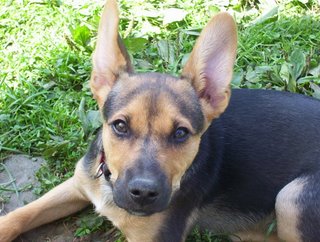 They are really like that.....my son insist she has alot of Jack Russell in her....I say it's Rat Terrier.....I'll ask the Vet next week at their first doc appointment. Those two just love each other.....so much so that this evening Eros, the all black pup, just up and peed on Chloe while she was chewing on a rawhide. Chloe was so into that rawhide and so not wanting Eros to have it, she never flinched. He tried it again later in the evening, but that time Chloe noticed. I'll have to find out what that means when dogs pee on each other. UGH!
I have been crocheting but mostly working on my prayer shawl and searching for some upcoming patterns I may be needing but that's really about it. I have a couple of crochet pics to post but probably do that tomorrow.......I'm getting back to my regular crafting now which is good.....I need to to keep myself sane!!!
Alright, that's it for tonight. I wanted to show you pics of our picnic cruise on the three rivers this weekend but the Sweetie Man has to download the pics....so stay tuned later in the week.
Back to the football game...second half coming up and it's still 0/0.....GO STEELERS!!!!!!! Till tomorrow everyone!!!